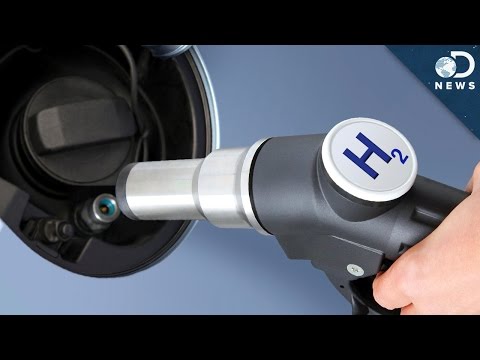 This episode of DNews is brought to you by Toyota’s Hydrogen fuel cell vehicles. Leave your mark. Toyota, let’s go places. It’s 2019, Hollywood prophecy says we should have flying cars, and though we don’t have those… how about hydrogen cars? Fueling your car with hydrogen is weird. Hydrogen, number 1 on the periodic table. It’s a powerful combustible element, it blew up the Hindenburg after all! But it’s also part of water, and carbohydrates, and so many other things in nature. The thing is… hydrogen is a lot of things, and IN a lot of things, because it’s a super simple element; one proton, one electron and it makes up SEVENTY-FIVE PERCENT of the universe. Yeah, three quarters of everything is hydrogen. Hydrogen is used for food processing, petroleum refining and in a variety of industrial applications. The U.S. already creates more than 9 million metric tons of hydrogen annually! So I say again, fueling your car with hydrogen is weird, but not THAT weird.

You’ve probably heard of hydrogen fuel cells, they’ve been around for a while. They were first invented in 1839. They use oxygen and hydrogen to power a car with no moving parts, and only emit clean water vapor when burned. And according to many car companies, 2015 might be the year the rubber meets the road for hydrogen as a fuel. When you think of creating hydrogen, you probably think of this but 95 percent of America’s hydrogen is produced using natural gas steam reformation. Factories use high temperatures and pressures to break the natural gas into hydrogen (YAY!) and carbon oxides (BOO!). You can also make it using electrolysis — essentially running electricity through water to split the hydrogen from the oxygen! Two great things! But something has to GENERATE that electricity, and in the U.S., that’s usually coal power.

But if we used wind, or solar — then we’d be onto something. Once it’s made, it has to be cooled and stored, which uses MORE fossil fuel energy; and then you have to ship it to pumping stations using trucks and trains… you get it. The HYDROGEN is great, but we suck at making it and moving it around. For now we’re stuck making hydrogen using fossil fuels, which might not be ideal, but that could all change once hydrogen vehicles get on the roads! Why buy a hydrogen car if there’s nowhere to fill it up! The government and private companies are partnering to get fuel stations out there… California has a goal in place to have more than 15 percent of all cars in the state be zero-emissions vehicles by 2025 — and to hit that goal they’ve pledged 200 million dollars to build 100 more fueling stations before then. There are already 10, though I don’t imagine they’re very busy since there aren’t too many cars on the road yet, but that’ll change soon too.

In tandem with this momentum, a bunch of auto companies have pledged to release hydrogen fuel cell cars this year, and with 100 more stations coming too, filling them up should be a cinch! According to research from the University of California Davis, those 100 stations should be able to make fuel cell vehicles cost-competitive with gasoline! We’d like to take a second and give a shout out to Toyota for supporting DNews. They were at CES this week and released their patents for new fuel-cell technology, and revealed THEIR fuel cell car to the world, the Mirai. They’re hoping these royalty-free patents will spurn a hydrogen-fuel-based future and spent the last decade reducing the cost of fuel cell production 95 percent. Have you ever seen a hydrogen fuel station? Would you want a hydrogen car? .